A downloadable game for Windows and macOS

learning to overcome their patterns

and a nifty little jump

escape (or start) to go back to the title screen 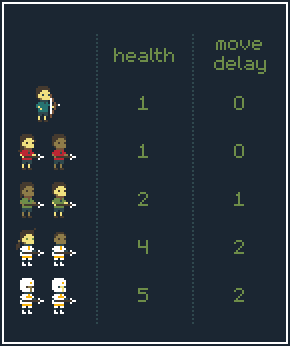 enemies that are about to move or attack are animated,
inactive enemies have stunned symbols overhead

enemies move after you do, based on your new position
enemies attack you if possible, and otherwise try to move closer

archers fire horizontally and spend one move preparing to fire

melee enemies counterattack when attacked, but archers do not

attacking an enemy, being attacked by an adjacent enemy,
being hit by an arrow and falling more than two floors
all deal one damage

collect hearts to improve your health

when you die, the health for your next attempt is given by
half the number of souls collected on this attempt

kill enemies and consume their souls to improve your soul count

collect orbs to improve your damage

made by daniel linssen (@managore)
for ludum dare 33