A downloadable game for Windows

coins are your life, your weapon and your currency

reds move after every second step you take, and if you end up next to a red when it's about to move, you lose a coin. if you get hit and have no coins, you’re dead, game over!

step on the staircase to go down to the next floor of the dungeon. as you go deeper, enemies get tougher and spawn in greater numbers, and shopkeeper prices go up

how many gems can you buy before you die? 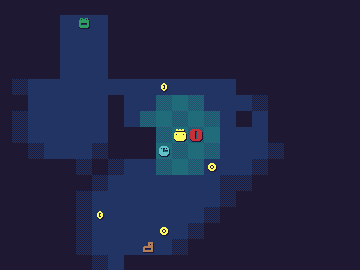 a game by daniel linssen originally made for ludum dare 44

(v1.0.1 has some small improvements over the original including faster movement, animated reds and no more dead-end corridors)

this game is in active development. audio, balance changes, more shopkeepers, menus and a winning condition are all planned for the not too distant future